The development comes amid the President’s Rule in Maharashtra that has been imposed in the state after Koshyari’s report to the Centre which stated that the formation of a stable government is impossible in the current situation despite all his efforts.

Uddhav Thackeray after meeting with Congress leaders: Discussions have started, whatever decision will be taken we will inform soon.

Shiv Sena leader Sanjay Raut after being discharged from Mumbai’s Lilavati Hospital: The next Chief Minister will be from Shiv Sena. 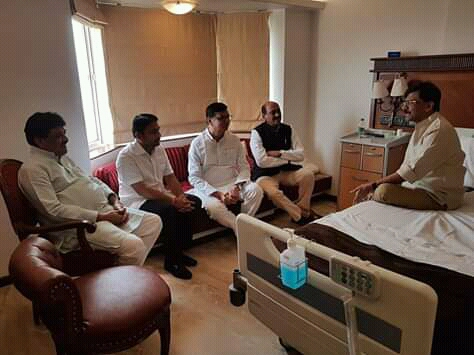 Shiv Sena’s lawyer Sunil Fernandes: We aren’t filing a fresh petition in Supreme Court on behalf of Shiv Sena today. Decision on when to file it hasn’t been taken yet. No mentioning of y’day’s petition (against Maharashtra Guv’s decision to decline giving them 3 more days) also.

#Ajit Pawar, NCP: If there is a situation of defection, three parties A,B and C will decide to back one common candidate then no one can defeat us.

Ajit Pawar, Nationalist Congress Party: NCP had given a letter to the Governor seeking an extension of three days as Congress leaders were not here and situation was different in the morning. We wanted more time for the entire procedure (formation of govt).

# Shiv Sena hits out at BJP via Saamana

Shiv Sena says the mandate was given to both of us so why didn’t BJP agree to our demands. We took the decision to save the self respect of this Marathi soil. Why should we only be blamed? BJP should follow the Marathi asmita as well of respect. BJP is ready to sit in opposition that means they are ready to empower Cong and NCP. If BJP would have honoured it’s word, this situation would have never arised. They wanted to finish us. We will see what can be done with Cong and NCP now. Being with BJP was like drinking a venemous drink and now to stabilize Maharashtra politics we are doing this. When BJP failed , we should have been given more time. BJP got as many as 15 days and we only 24. What is this justice and law? Most MLAs of other parties are in their constituencies. How to get their signs in 24 hrs. This is called as misuse of agencies and law.

# Meeting was held between  Uddhav Thackeray and Ahmed Patel