Janhvi Kapoor, Rajkummar Rao, Varun Sharma starring ‘Roohi’ is all set to hit cinemas. Take a look at the teaser for the comedy-horror experience. New Delhi: After the resounding success of the 2018 film ‘Stree’, actor Rajkummar Rao is back with another horror-comedy titled ‘Roohi’, also starring Janhvi Kapoor and Varun Sharma. The trailer of the upcoming film is finally out and it will give movie buffs all sorts of spooky vibes while leaving them in splits.

The trailer of the film was shared by Rajkummar on Instagram. He wrote, “Watch the #RoohiTrailer at your own risk kyunki iss baar mard ko jyada dard hoga! #Roohi in cinemas 11th March, 2021.”

The nearly three-minute-long trailer, which is equal parts hilarious and scary, has all the elements — an engaging storyline, funny dialogues, drama, and spooky vibes to keep the viewers on their toes. It also features Shamur’s iconic song titled ‘Let The Music Play’ playing in the background. The trailer also bears resemblance to the 2018 Bollywood film ‘Stree’.

The trailer, which promises a fair share of laughs and jump scares, opens with a voiceover narrating the story of a chudail (witch), who abducts to-be-brides the moment grooms fall asleep.

A few seconds into the trailer, Rajkummar and Varun are seen abducting Jahnvi (Roohi), who has been possessed by a ghost and is out to create havoc. Rajkummar tries to befriend Janhvi and thus, the drama loaded with hilarious scenes and spooky vibes heightens. How Rajkummar and Varun try to tackle the ghost in her seems to be a tricky thing for the two. The duo tries every trick in the book to fix her, creating a perfect blend of horror and fun. 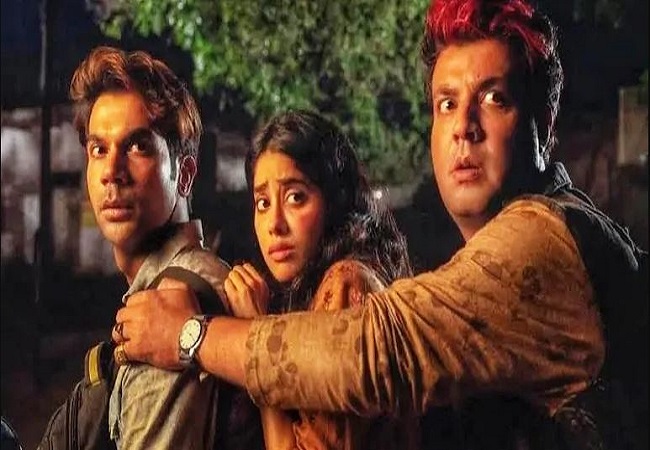 While the upcoming film marks the first-ever collaboration of Rajkummar and Janhvi, Rajkummar and Varun have earlier shared screen space in the 2015 release ‘Dolly Ki Doli’.

The forthcoming horror-comedy is being helmed by Hardik Mehta. A Jio Studios Presentation, ‘Roohi’ is being produced by Dinesh Vijan and Mrighdeep Singh Lamba.

‘Roohi’, which is the first major Bollywood release post lockdown, was set to hit the cinemas in the first week of June last year, but the film had to be postponed due to the ongoing coronavirus pandemic.
The upcoming horror-comedy will also become the first film to arrive in theatres after the Ministry of Information and Broadcasting allowed cinema halls nationwide to operate at full capacity from February 1 with COVID-19 safety protocols put in place. The film is set to hit the theatres on March 11, this year, and is based on the lines of the 2018 hit film ‘Stree’, which featured Shraddha Kapoor and Rajkummar Rao in lead roles.