The sequel to the original “Top Gun” had to wait 36 years for audiences to see it, but critics believe the Paramount/Skydance production was well worth the wait, with some even claiming it to be better than the original. Despite not playing in China or Russia, the picture, which had been delayed two years due to the Covid-19 outbreak, grossed $124 million in its initial three days of release over the holiday weekend. It was Cruise’s first $100 million opening.

“Doctor Strange in the Multiverse of Madness” fell to second place in its fourth weekend, grossing $16.4 million for Friday through Sunday and $21.1 million for the entire four days. 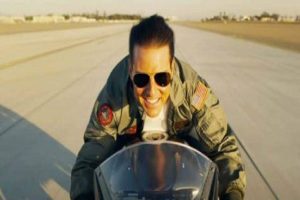 The Disney film starring Benedict Cumberbatch had a year-to-date high of $187 million at the box office.

“Downton Abbey: A New Era,” from Focus Features, came in fourth place with $5.9 million over three days and $7.5 million over four days. It stars Maggie Smith, Hugh Bonneville, Elizabeth McGovern, and Michelle Dockery, and is based on the enormously successful British series.

Universal’s family-friendly animated “The Bad Guys” came in fifth, with $4.6 million in three days and $6.1 million in four.

The following people rounded out the top ten: