New Delhi: Rapper Travis Scott has issued a statement after the tragedy at his Astroworld festival in Houston, which left eight people dead and many injured on Friday night.

Scott took to his Twitter handle to offer his condolences to the families of the people who lost their lives.

He wrote, “I’m absolutely devastated by what took place last night. My prayers go out to the families and all those impacted by what happened at Astroworld Festival.”

“Houston PD has my total support as they continue to look into the tragic loss of life. I am committed to working together with the Houston community to heal and support the families in need,” he added.

“Thank you to Houston PD, Fire Department and NRG Park for their immediate response and support. Love You All,” the rapper concluded. 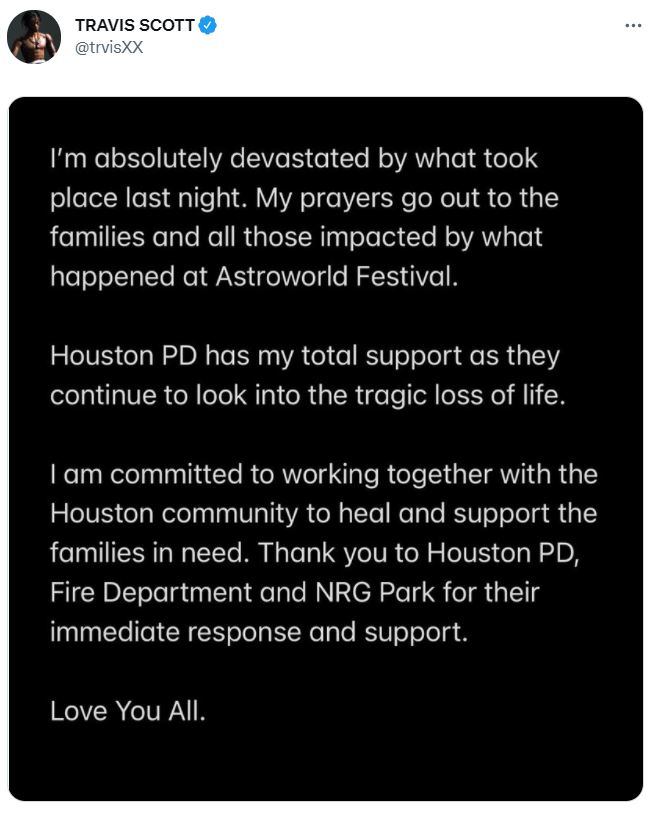 Scott also took to his Instagram Stories to speak about the issue at length. The 29-year-old rapper told his fans that he is hoping to reach the victims’ families.

“I just want to send out prayers to the ones that was lost last night. We’re actually working right now to identify the families to assist them through this tough time,” he said.

“My fans really mean the world to me, and I always want to leave them with a positive experience,” he added.

The star said that he prioritized the safety of his fans at the festival: “Any time I can make out anything that’s going on, I’d stop the show and help them get the help they need, you know? I could never imagine this situation.”

Scott added that he and his team have “been working closely with everyone to get to the bottom of this — City of Houston HPD, fire department — everyone, to help us figure this out” and told fans to contact authorities with any information. “Everybody continue to keep your prayers,” he said.

“I mean, I’m honestly just devastated and I could never imagine anything like this happening. I’m going to do everything I can to keep you guys updated and keep you guys informed of what’s going on. Love you all,” Scott signed off.

As per People magazine, Scott, who was arrested in 2017 for allegedly inciting a riot during a concert in Arkansas and later pled guilty to disorderly conduct, faced accusations from festival-goers on Saturday who claimed he continued to perform even after seeing distraught and injured fans in the audience.

One festivalgoer, David McGilver, told the outlet that he was “upset” with Scott for not stopping the concert sooner.

“I still can hear this in my head — I remember me being on the ground and the music stopping and I could hear [Travis] say, ‘Y’all know what y’all came here for.’ And you can hear everybody screaming out for help. And then the music just plays back again,” McGilver said.

However, a source close to the musician told People magazine that Scott was unaware of the magnitude of the situation. “The lights were shining in his eyes and he couldn’t see what was happening,” the source said. “He thought someone had just passed out, which happens during concerts.”

Scott is “in absolute pieces” and is a “mess about what happened. He’s incredibly upset about everything and horrified,” the source added.

About 30 minutes into his set (which was streamed live on Apple Music), Scott briefly paused the show when he noticed an ambulance driving through the crowd. Later, he stopped his performance again and asked security to “jump in real quick” and help “somebody passed out right here.”

Houston Mayor Sylvester Turner confirmed at a news conference on Saturday that eight people — ranging in age from 14 to 27 — died, while hundreds of other festival-goers reported injuries at NRG Park.

50,000 fans attended the show, which led to a surge during Scott’s performance at the festival outside NRG Park.

At a press conference following the concert, Houston fire chief Samuel Pena clarified the timeline. He said that the crowd began surging forward at 9 pm, as there was panic involving people running for safety.

At that point, Scott paused his set several times to ask security to help out fans, and members of the fire department were sent into the dense crowd to rescue the injured.