Moga (Punjab): Ahead of the Punjab Assembly elections, actor Sonu Sood on Monday said Punjab Chief Minister Charanjit Singh Channi should be given one more chance.

“Channi sahib has done amazing work in the last few days. I want him to become CM again. He is an amazing human being. He had little time, it takes some time to adjust. But in such a short span of time, great enthusiasm and passion had been shown by him and he should be given more chance,” Sood told ANI while he was campaigning in Punjab’s Moga.

“Congress has an edge this time,” he claimed.

On being asked about his sister, Malvika Sood, contesting upcoming Punjab polls from Moga, Sonu Sood said, “My mother, a professor, taught children all her life. My father was a social worker. Schools, colleges and dharamshalas here are constructed on our plots of land. So, it is in our blood.” “My sister took more responsibility, maximum vaccinations in our city were facilitated by her. As far as education and helping people is concerned, she had worked in Moga on a large scale. People pushed her to be a part of the system,” he added.

Reacting to earlier speculation that he and his sister were joining Aam Aadmi Party, he said. “Parties do not matter, the thinking of individuals changes the society and the country. Arvind Kejriwal is still close to me and even today I am the brand ambassador of the ‘Desh ka Mentor’ of the country.” 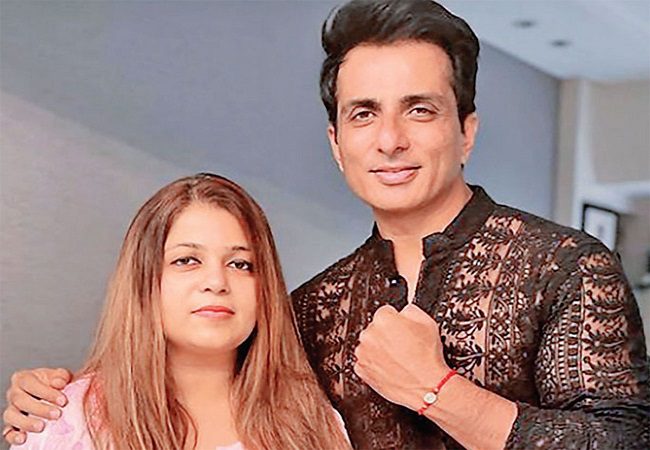 There were talks of joining the party at the top level with Arvind Kejriwal and Raghav Chaddha. Talks were held with many parties. But right now I am very busy with my work, I am building hospitals in Chhattisgarh, Telangana and Mumbai. I am very busy as an actor too. If I want to come into politics, I should come with my full heart, I am not ready for it right now, he added.

“Positions are won, not demanded, there was talk with the BJP too, but I said that I have not made up my mind yet.” I have refused Rajya Sabha seat twice,” he stated.

On people protesting against Malvika Sood contesting from Moga, he said, “Some people say that a parachute candidate has landed, but many of these people were not even born, since the time, our family has been doing social service. People are with us. Whether we will win or not, is not known, but today we are working for health and education.” Referring to the IT raid conducted on his premises, Sood said that “when my premises were raided, not only the people of some parties but the whole country had supported me. My job is to connect with people.”

“A Gentleman”: Fans pour in praises for Siddhant as he lend jacket to freezing Ananya at ‘Gehraiyaan’ promotions