Mohali: Amid the raging controversy over the alleged leaked objectionable videos of Chandigarh University students, University authorities on Sunday claimed that no objectionable video was made of the girl students except a personal video shot by a girl, which she shared with her boyfriend.

In an official statement, RS Bawa, Pro-Chancellor, Chandigarh University said, “There are rumours that seven girls have committed suicide whereas the fact is that no girl has attempted any such step. No girl has been admitted to the hospital in the incident.”

During the preliminary investigation conducted by the University, there have been no videos found of any student which are objectionable except a personal video shot by a girl which was shared by herself her boyfriend.”

Bawa informed on the request received by the students, Chandigarh University has itself volunteered the further investigation to the Punjab Police Department which has taken one girl into custody and has filed an FIR under IT Act.

The University said all the mobile phones and other material has been handed over to the police for further investigation. The statement said Chandigarh University is fully cooperating with police in the investigation.

Punjab Government ordered a high-level inquiry over the matter.

“Sad to hear about the incident of Chandigarh University. Our daughters are our pride. I have ordered a high-level inquiry into the incident. Strict action will be taken against whoever is guilty.

I am constantly in touch with the administration. I appeal to all of you to avoid rumours,” said Punjab Chief Minister Bhagwant Mann.

Protesting students alleged that a student made videos of girl students while taking a bath in the hostel. The video was later made viral on social media.

The protesting students also claimed that after the videos went viral, girl students living in the hostel attempted suicide. However, police refuted the suicide attempts claim.

Police have arrested one student in the matter.

“It is a matter of a video being shot by a girl student and circulated. FIR has been registered in the matter and the accused is arrested. No death has been reported related to this incident.

As per medical records, no suicide attempt or death has taken place. One student who was taken in an ambulance was suffering from anxiety and our team is in contact with her,” said Senior Superintendent of Police (SSP), Mohali Vivek Soni.

“Forensic evidence is being collected. So far in our investigation, we have found out that there is only one video of the accused herself. She has not recorded any other video of anyone else.

Electronic devices and mobile phones have been taken into custody and will be sent for forensic examination. Apart from the video of one student, no other video has come to our notice,” he added.

“It is really saddening to know about the unfortunate incident at Chandigarh University. Since this matter is very sensitive, it is my request not to forward any unsubstantiated news. There is no news of suicide by any girl student. I assure justice to University students, especially girls. The DC Mohali and SSP have been ordered to conduct a thorough enquiry into the entire incident. Guilty would not be spared,” said the Minister.

Punjab School Education Minister Harjot Singh Bains has appealed to Chandigarh University students to remain calm and assured them that the guilty will not be spared.

“I humbly request all the students of Chandigarh University to remain calm. No one guilty will be spared. It is a very sensitive matter and relates to the dignity of our sisters and daughters,” said the Minister in a Twitter post.

“This is a serious matter. An investigation is underway. I am here to assure parents of all students that the accused will not be spared,” said Manisha Gulati, Chairperson, Punjab State Women Commission.

Taking to Twitter, Kejriwal said, “A girl recorded objectionable videos of many girl students in Chandigarh University and made them viral. This is very serious and shameful. All the culprits involved in this will get the harshest punishment. Victim girls have courage. We all are with you. Act with patience.” 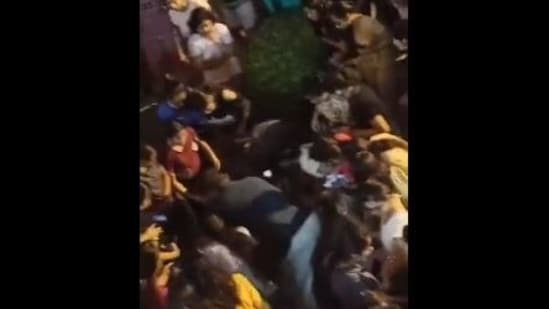 “It is an unfortunate incident. Police should take serious action against those involved in this incident so that such incidents do not occur again,” the BJP leader told ANI.