Patna (Bihar): Ace poll strategist Prashant Kishor on Thursday put paid to speculations of him floating a new political platform stating that he is set to embark on a 3000 km ‘padyatra’ that will start from Mahatma Gandhi’s ashram in Bihar’s Champaran on October 2.

He said he will launch a ‘Jan Surraj’ (Good Governance) campaign in the next three to four months into which he will rope in eminent personalities of Bihar who want to bring about a positive change in the state. Prashant Kishore, popularly referred to as PK, said that there are no elections in Bihar in the near future and so he is not launching a political party for now. However, he did not comment on future plans on his own political platform.

“It is being speculated that I will form a new political party, I will not make any such announcement today. My role in the coming days will be to meet the people who are connected to the social and political life of Bihar and who understand Bihar’s problems and bring all of them together on one platform. We have identified and contacted nearly 17,500 people in the past four to five months,” Kishor said.

He added: “If we will decide in the future that we need to make a political party then it won’t be Prashant Kishor’s party. It will be a people’s party”.

“If a large number of people come together on one platform, and collectively decide on the need for a political party, then the announcement of that party would be made. Even if that party is formed, then it will not be Prashant Kishor’s party, but every such person’s party who wants to accompany in the formation of the political party. This work should be completed by August or September,” the poll strategist said. 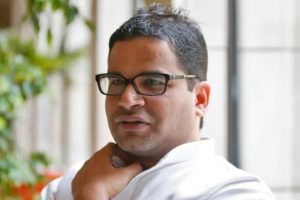 “In the coming three to four months, I will meet most of these people personally and discuss the methods to implement the idea of Jan Suraaj (good governance). My experience says that nearly 90 percent of people agree that there is a need for a collective new effort,” he further added.

Kishor had recently turned down an offer to join the Congress stating that the grand old party was in need of leadership. On May 2 he had posted a cryptic tweet on his timeline in which he said, “My quest to be a meaningful participant in democracy and help shape pro-people policy led to a 10yr rollercoaster ride! As I turn the page, time to go to the Real Masters”.

Hitting out at Nitish Kumar-led National Democratic Alliance (NDA) and Lalu Prasad Yadav led RJD for their respective tenures as chief ministers, Kishor said that it is an undeniable truth that “Bihar is the most backward and poorest state” of the country. “The amount of truth that is there in their claims of development of Bihar during their respective tenures, it is also a truth that even after the 30-year rule of Lalu Yadav and Nitish Kumar, Bihar is the most backward and the poorest state of the country. Bihar still stands at the lowermost step in most of the parameters of development. If Bihar has to come in the category of advanced states, we cannot reach there walking on the same path as in the past 10 to 15 years,” he said.

“Those who are connected to this land and understand the issues pertaining to this state and have the capability to solve the problems and who want to change Bihar, most of such people need to come together and make a new effort,” Kishor added calling upon the people to join him in his campaign.

Assuring the people of the state of his dedication, he struck down the question of “quitting in the middle”.

“I want to assure the people of Bihar that I am dedicating everything that I have for the betterment of the people. There is no question of quitting in the middle of backing down because of the troubles,” Kishor said.

Talking about the possibility of contesting the elections in alliance with any other political party, he said that he has no such plans yet.

“I have no thoughts about contesting the election in Bihar with any political party. If contesting elections was my target, then it could be fought by forming a party a year before the polls. I don’t need any such experiment with four years to go for the polls,” he said.

Asked about his Chief Ministerial ambitions in the future after the formation of his own party, Kishor said that he is not sure if he would hold any key positions like the president of the party.

“If we form the party, I cannot say that I will be the face of the CM candidate or the chief of the party,” Kishor said.

Kishor has been key in victories in Bihar, Delhi, Andhra Pradesh, Tamil Nadu, Punjab, and the latest in West Bengal elections.