General Rawat's visit holds importance since it comes in the wake of Defence Minister Rajnath Singh's visit to Ladakh being rescheduled.

He further informed, "I am very happy to inform you that all our people have downloaded the Aarogya Setu application and should anyone get affected, we would be able to pick that up very soon. We would be able to ensure that the spread does not happen." 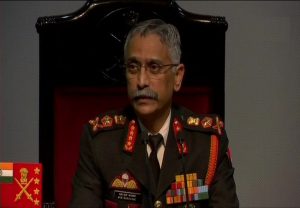 Formation of CDS, creation of Department of Military Affairs a big step towards integration: Army Chief On his last day in office as the Chief of Army Staff, General Bipin Rawat on Tuesday paid tribute to martyrs at the National War Memorial here on Tuesday.General Rawat remembered the brave personnel who had sacrificed their lives in the service of the nation and paid his tributes at the ‘Amar Jawan Jyoti’.

He was also part of the Indian Peace Keeping Force in Sri Lanka and had served as India's defence attache at the Indian Embassy in Myanmar for three years.

General Rawat remembered the brave personnel who had sacrificed their lives in the service of the nation and paid his tributes at the 'Amar Jawan Jyoti'.