Thackeray, who was addressing a mega rally here demanding the ouster of Pakistani-Bangladeshi infiltrators living in the country, asked: "To whom are you showing your strength?" ﻿ Tariq Fateh, the Pakistan-Canadian author, is known for courting controversies with his bold remarks. Reacting on the CAA protests... Deepak Chaurasia was reporting about the ongoing protest from the spot. It’s then a couple of people came from behind, heckled him while he was doing his job. Stone-pelting allegedly took place when the procession supporting CAA and NRC, being taken by members of Vishva Hindu Parishad (VHP), was passing through the Amla Toli. Azad was also asked to that instead of marking attendance every Saturday, he will mark it whenever he is in Saharanpur and if in Delhi on a Saturday he will inform DCP (crime).

Advocate Mehmood Pracha, representing Azad, had on Tuesday said that the petitioner was sent to jail without any evidence in connection with anti-CAA protests in Delhi's Darya Ganj area last year. 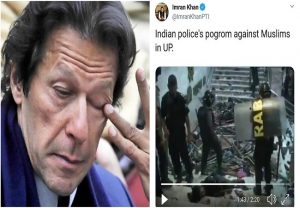 Will recover Rs 80 crore from vandals for damaging railway properties during CAA protests: Railway Board chairman

"There has been damage of railway property approximately worth Rs 80 crore during the protests, of which Rs 70 crore is of the Eastern Railway and Rs 10 crore of the North Frontier Railway," Yadav told reporters.

UP govt may ban PFI for ‘instigating’ violence during CAA protests

The state police had earlier arrested three members of PFI in connection with the violent protests in Lucknow on December 19 against the CAA and National Register of Citizens (NRC).