The three terrorists were killed in an encounter in a joint operation by the Army, Central Reserve Police Force (CRPF) and Jammu and Kashmir Police in Tral sub-district of Pulwama district . It was around 3:00 pm on this day last year when a Jaish-e-Mohammad (JeM) terrorist rammed a vehicle carrying explosives into the Central Reserve Police Force (CPRF) convoy on Srinagar-Jammu national highway.

A few days ago, four people, including two security personnel, sustained splinter injuries in a grenade attack that took place in Srinagar's Lal Chowk area. The incident happened on Sunday. CRPF has stepped up security checks at check-points in the valley. The security personnel are scanning vehicles, a day after the grenade attack at Lal Chowk in Srinagar. The encounter had broken out between the security forces and terrorists earlier today during checking of vehicles near the Bann toll plaza. 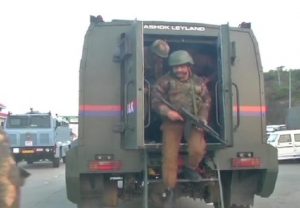 The security forces suspect that a total of three terrorists were moving in the truck. While one has been killed, the two other suspects have run away in the nearby jungle area. CRPF personnel carried the woman through the jungles of village Padeda in district Bijapur to help her reach the hospital. IN PICS: Kashmir turns white after fresh spell of snowfall

Srinagar received fresh spell on snowfall on Sunday, throwing a white layer of ice on roads, streets and houses. Here are some pictures of cars covered with snow after heavy snowfall in Srinagar on Monday. CRPF personnel can also be seen patrolling after heavy snowfall. They were also seen cleaning their snow-clad vehicles.

Committed to ensure that all CRPF personnel get to spend 100 days with family: Amit Shah

"We have decided that medical check-up facility will be made available not only for the Jawans but his family as well," Shah said while addressing the officers and jawans of CRPF at the foundation stone laying ceremony of the Directorate General building of the organisation.