Bharat Bandh on March 26: Check what will remain shut, what’s not

The farmers are demanding an absolute rollback of the new farm laws passed by the centre and a guarantee of Minimum Support Price (MSP). CM Yogi met a delegation of farmers from western Uttar Pradesh at his official residence on Saturday, and said that the new farm laws are enacted with the objective to double the income of farmers. “In today's meeting of Samyukt Kisan Morcha, we have finalised the programmes till March 15. On March 6 when the protest enters Day 100, farmers will block Kundli–Manesar–Palwal Expressway at different points between 11 am & 4 pm,” Yogendra Yadav said. Section 144 imposed in Lucknow till April 5, amid chances of farmers’ protest

The local administration said that political parties, student organisations, or farmer unions might hold protests in the area and that will have an "adverse effect" on the current peaceful situation. New Delhi: The ‘rail roko’ agitation in Uttar Pradesh remained by and large peaceful, however no major obstruction was reported... "I am very grateful to BJP and its senior leaders. I was told by the media that they have said I am welcome (in the party). It is a privilege. Today we have the best of the leadership at the Centre. The world is recognising," Trivedi told media. 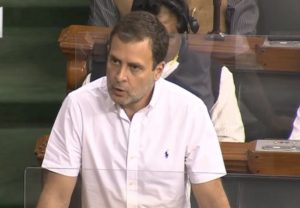 PM says he has given options. Yes, you gave 3 options - hunger, unemployment and suicide, Rahul Gandhi said in Lok Sabha "The protesters have done the work of ruining the pious agitation of the farmers. Therefore, it is very important for people of the country to differentiate between "andolankari" and "andolanjeevi," said PM Modi in Lok Sabha. Taking a dig at Congress leader Adhir Ranjan Chaudhary who had been repeatedly interrupting him, the Prime Minister said his actions have been noted where he wanted it to be".