Interestingly, the Kashmir Frontier of BSF has recorded just one infiltration in comparison with a previous year where 4 infiltrations took place till the first week of November. Sources said India issued its strong objection to the use of this illegal map by Pakistan and Russian side, as the Chair, tried very hard to persuade Pakistan not to do so.

Defence Minister Rajnath Singh, MoS Defence Shripad Naik and three service chiefs paid tributes at the National War Memorial in New Delhi on the day which marks the victory of Indian soldiers in the Kargil War. 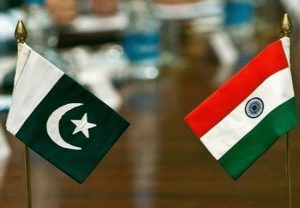 India on Sunday declared two officials of the Pakistan High Commission as "persona non grata" on charges of espionage and ordered them to leave the country within 24 hours, the Ministry of External Affairs (MEA) said. According to updates, Abeed Hussain and Tahir Khan work in the visa section of the Pakistan High Commission. The two also worked for Pakistan’s Inter-Services Intelligence or ISI and used fake identity papers to move around. Pak’s potential for trade will grow once relations get normal with India: Imran Khan

On Monday, senior Indian tennis player Rohan Bopanna had pulled out of the match against Pakistan due to a shoulder injury.

Venkaiah Naidu statement comes after Defence Minister Rajnath Singh made a similar stance over a week ago saying there would be no talks with Pakistan unless it acts against terrorists and stops supporting terror activities.

Defence Minister Rajnath Singh and the Indian Air Force Chief Marshal BS Dhanoa will receive the first aircraft from the French authorities near the plane manufacturing plant in Bordeaux.