The visibility was below 200 metres. Delhi airport officials said that five flights have been diverted due to bad weather, as the pilots were not trained to land under low visibility (CAT III ) conditions.

Delhi woke up to dense fog on Wednesday morning 7 degrees Celsiusas the minimum temperature dipped to 7 degree Celsius. Due to dense fog, visibility was reduced to 50 metres in the national capital at 5:30 am, India Meteorological Department said.

“Dense to very dense fog very likely to affect flight operations and transportation due to poor visibility,” the MeT department tweeted. At least five flights were diverted from Delhi due to bad weather.

The visibility was below 200 metres. Delhi airport officials said that five flights have been diverted due to bad weather, as the pilots were not trained to land under low visibility (CAT III ) conditions. 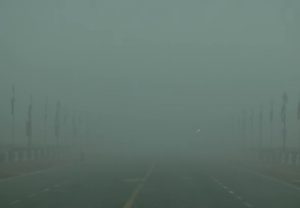 Twenty-two trains in the northern region are also running late, according to news agency ANI.

The situation is likely to continue till 10 am to 11 am and improve thereafter, the IMD said in a tweet, according to  ANI.

Delhi: The national capital wakes up to dense fog this morning. Delhi is recording a minimum temperature of 7 degree Celsius this morning. pic.twitter.com/0nnUq5EooO

The weather department also predicted that a fresh western disturbance is likely to affect the western Himalayan region from January 24.

The mercury in the national capital rose on Tuesday due to a cloud cover. The city recorded a minimum of 9.2 degrees Celsius, which was two notches more than normal, the IMD said.

However, temperatures are expected to dip in the next two to three days with the commencement of icy winds from the hills on Wednesday.

Meanwhile, calm winds and cloud cover led to an increase in pollution levels on Tuesday. The overall air quality index stood at 364 at 4 pm, up from 269 recorded on Monday.