It is reiterated that both these incidents are neither co-related nor do they have any connection with other global or local activities. 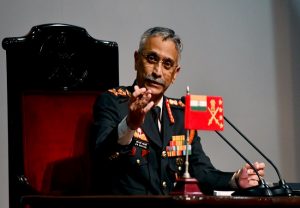 General Naravane took over as the 28th Chief of the Army Staff on December 30, succeeding General Bipin Rawat who has become India's first Chief of Defence Staff. Naravane previously served as the Vice Chief of Army Staff. New Delhi: On his maiden visit after assuming the appointment of the Chief of Army Staff, General MM Naravane visited...

He was also part of the Indian Peace Keeping Force in Sri Lanka and had served as India's defence attache at the Indian Embassy in Myanmar for three years.

Singh's defence of Gen Rawat came a day after the Army Chief's remarks while addressing an event in the national capital on Thursday.

"It is necessary for the people of Jammu Kashmir to understand that what is happening there is for them only. When the government has given certain instructions...Article 370 has been scrapped...all this has been done to integrate Jammu and Kashmir with India."