It stated that the Home Department, Government of Jammu and Kashmir, through a letter dated February 18 had "advised the Election Authority to consider deferring of the conduct of polls based on credible inputs from the law enforcement agencies." The majority of jokes were on the Congress which ruled the capital for 15 years between 1998 to 2013 but has been reduced to zero in the last two elections. BJP president JP Nadda also urged the citizens of Delhi to cast their votes in large numbers and participate in the biggest festival of democracy. The minister went door to door and handed booklets of BJP to the residents of the colony. He was accompanied by other party workers and later joined by residents too. 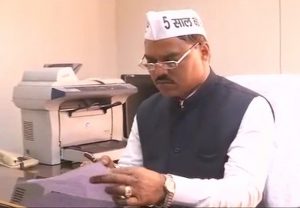 This comes after the Delhi High Court on Friday quashed the election of former Delhi Law Minister Jitender Singh Tomar from Tri Nagar Assembly constituency in 2015 for wrongly mentioning his educational qualification in the election affidavit.

The exit poll had suggested the Conservatives would win 368 seats in the 650-seat parliament, with the main opposition Labour party trailing on 191, as per a report by the Washington Post.

Javadekar confident of BJP winning over 62 seats in Jharkhand

In 2014, the BJP won 35 seats and formed the government with the support of All Jharkhand Students' Union (AJSU), which has now snapped its ties with the party.

Shiv Sena hits out at Centre over economic slow down

Making a reference to the banking crisis, the Editorial said, "Election which took place in Maharashtra just before Diwali...there too, it was more silence than excitement."