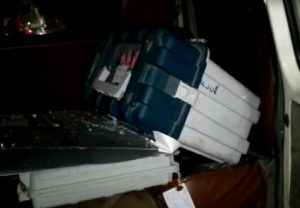 The second phase of Assembly polls was held in 39 constituencies across 13 districts of Assam on Thursday. Buoyed by the favourable results in Manipur by-elections, Manipur CM Biren Singh on Monday, congratulated the BJP MLAs and workers for winning 4 out of 5 seats.

Last date of filing nomination as announced by the Election Commission is October 4 while the date for the scrutiny of the same is October 5.

Lok Sabha Elections Phase 7: Here is all you need to know

In this phase of election, 13 seats each in Uttar Pradesh and Punjab, nine in West Bengal, eight seats each in Bihar and Madhya Pradesh, all four constituencies in Himachal Pradesh, three in Jharkhand and one seat in the Union Territory of Chandigarh will witness polling.

Lok Sabha polls phase 6 UPDATES: Voter turnout till 7am is 64.27 per cent

New Delhi: Voting for the seven Lok Sabha seats of Delhi along with 52 others seats in the 6th phase...

The fate of several key leaders including Congress president Rahul Gandhi, Home Minister Rajnath Singh, UPA chairperson Sonia Gandhi and Union Minister Smriti Irani will be decided in the fifth phase of the Lok Sabha polls which will witness voting in 51 constituencies spread across seven states.

The first four phases of the polls were held on April 11, 18, 23 and 29. After the fifth phase today, the sixth and seventh phases will take place on May 12 and May 19 respectively. The counting of votes is scheduled on May 23.

The Dalit leader on Tuesday attacked the party, saying candidates are being chosen on the basis of "some inscrutable internal standards" while ignoring the hard work of aspirants.

JJP leader and Hisar MP Dushyant Chautala, who was also present at the press briefing, said the two parties will jointly organise road shows, which would be attended by Delhi Chief Minister Arvind Kejriwal and prominent JJP leaders.