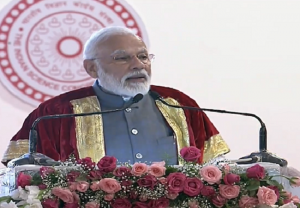 Our successes in space exploration should be mirrored in new frontier of deep sea: PM

In order to promote wellbeing, we should not only practice some of the tested traditional wisdom but also continuously enlarge its scope by introducing the modern tools and concepts of contemporary biomedical research, said Modi

Shouting slogans, the BJP MLAs rushed to the well of the House seeking implementation of aid to farmers. The Shiv Sena members, however, tried to snatch the placards from their hands leading to a ruckus in the Assembly.

Skyrocketing onion prices are a big reason to worry. With supplies dwindling further, onion prices have touched Rs 100-140 per kg.

The increase in the toxic air in and around Delhi is causing problems for the residents, making them fall into a pit of lung-related diseases and also cardiovascular diseases.

As per sources, Shiv Sena was quite keen for a swearing-in ceremony on November 17 - death anniversary of Bal Thackeray, but leaders from Congress and NCP have refuted these speculations.

Delhi: Farmers halt protest after govt agrees to five of their demands

The farmers said that their delegation was assured by the Agriculture Ministry officials that their remaining demands will be heard by Prime Minister Narendra Modi.

Hundreds of farmers from Uttar Pradesh have started a march towards Delhi today under the umbrella of Bharatiya Kisan Sangh (Indian Farmers' Organisation) to raise various farming related demands that they say have been not been met the government.

Will increase minimum days from 100 to 150 under MNREGA: Priyanka Gandhi

"We have decided to increase the minimum number of days from 100 to 150 under MNREGA. You will also get your wages on time, just like it was under Congress rule till 2014," Priyanka at an election rally here.

The Budget 2019 comes nothing but as a jackpot for small and middle class farmers as the Finance Minister announced a 'sabka saath, sabka vikas' Budget.

Interim Budget: Here is all you need to know about Modi Govt’s major announcement (Video)

Ahead of the General Elections 2019, Finance Minister Piyush Goyal will present the Interim budget in the Lok Sabha today at 11 am.