When Kangana Ranaut told her father, ‘If you slap me, I will slap you back’

Kangana wrote on Twitter, "My father has licensed rifle and guns, growing up he didn’t scold he roared, even my ribs trembled, in his youth he was famous for gang wars in his college which gave him a reputation of a gunda, I fought with him at 15 and left home, became first Baaghi Rajput woman at 15." Kangana Ranaut gets legal notice: The legal notice said Ranaut, in her tweet, claimed that Bilkis Bano was present at the farmers' protest and was available in Rs 100. Late Wajid Khan’s wife accuses in-laws of forcing her to convert to Islam, wants anti-conversion law to be nationalised

Kangana Ranaut, in a series of tweets, has extended her support to Kamalrukh tagging the PM of India and condemned the conversion of religion in inter-caste marriages. Kangana highlighted how she was allegedly ‘banned’, this time accusing a leading fashion magazine and designer. At the beginning of the video, Kangana is seen holding a placard, which reads - I Am Hindustan. I am Ashamed. #Justice For Ajay Pandit. Murdered In Anantnag Jammu And Kashmir. 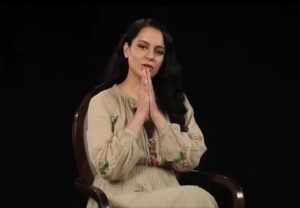 The complaint accused the actress and her sister-cum-manager Rangoli of “misusing their stardom, fanbase, fame, money, power and influence with an aim and intent to promote hatred, disbalance, fights in the country for their personal benefits and gains”.

The legal notice was sent for "wrongful, immoral, unethical and illegal acts of lending support to a journalist Justin Rao, who is accused of indulging in unprofessional and illegal activities."

At the launch of 'The Wakhra Song', Kangana lambasted the reporter for writing "dirty things" about her film 'Manikarnika', which marked her directorial debut.