Polling began on Thursday morning at 7 am for the sixth phase of the ongoing assembly elections in West Bengal and will conclude at 6 pm. The Chief Minister said that the supply of vaccines from the Centre to the state had been 'scarce and erratic', which had negatively affected the vaccination program. Addressing the rally, Shah said, "It is clear that BJP with 122 seats is way ahead of Mamata didi. We want to change the model of 'Bomb, Bandook aur Barood' with 'Vishwas, Vikaas aur Vyapaar'." ‘BJP with 122 seats is way ahead of Mamata didi’: Amit Shah in Purba Bardhaman

He said that BJP wants to change the model of ‘Bum, Bandook or Barood’ with ‘Vishwas, Vikaas or Vyapaar.’ West Bengal CM Mamata Banerjee paints as she sits on dharna at Gandhi Murti in Kolkata on Tuesday, to protest against a 24-hour ban imposed by ECI on her from campaigning from 8 pm of April 12 till 8 pm of April 13. West Bengal polls: Mamata Banerjee sits on dharna to protest against EC’s ban on her from campaigning for 24 hours

Leaders from different political parties also reacted strongly against EC's move to ban Mamata Banerjee from campaigning for 24 hours in the ongoing Assembly elections over her appeal for votes along communal lines. Didi has put future of Bengal youth at stake to protect her nephew’s future: PM Modi

"I want to reveal another truth about Didi. The central government is opening fast track courts for heinous crimes against women. Didi's government has stopped the implementation of even that in West Bengal," PM Modi said.

Referring to the Congress and the Left regime in West Bengal, the Prime Minister said, "Didi's entire team has been asked to go out of the field by the people of Bengal. She knows once Congress and Left went out of Bengal, they never came back. Didi once you go, will never come back again. TMC is going to lose." The Chief Minister had said that she will hold a protest rally in Cooch Behar on Sunday against the firing incident and visit the homes of the deceased. 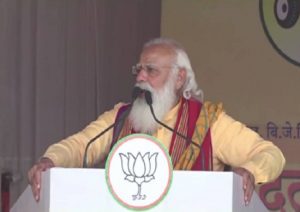