I’m happy that people of the country are with farmers, we are with them too: Arvind Kejriwal

This comes after Delhi Chief Minister Arvind Kejriwal had announced a one-day fast in support of the farmers' protest on Sunday. 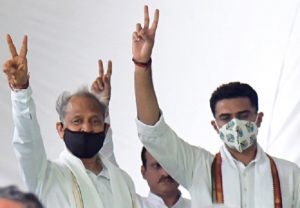 "The vote of confidence which was brought by the government was passed with a very good majority today in the Rajasthan assembly. Despite various attempts by the opposition, the result is in favour of the government," said Sachin Pilot

Scindia's decision to leave Congress was followed by the resignation from 22 party MLAs loyal to him. The legislators who have resigned include six ministers. Congress MLAs leave for Bhopal airport as they will be flying to Jaipur, in Bhopal on Wednesday.

Amid political furore in Maharashtra, NCP leader Nawab Malik tweets ‘we will succeed’

After a prolonged uncertainty over the government formation that lasted for nearly a month, Devendra Fadnavis on Saturday early morning took oath for the second consecutive term as the state chief minister, while Ajit Pawar was sworn-in as deputy chief minister.

All 17 disqualified MLAs to join BJP by 10 am on Nov 14: BS Yediyurappa

Assembly by-poll dates for Karnataka were announced on Sunday by Chief Electoral Officer (CEO) Sanjeev Kumar. A total of 15 Assembly constituencies in Karnataka are going to by-polls on December 5.

Tussle over govt formation: Shiv Sena to lodge its MLAs in hotel for two days

Shiv Sena is apparently putting all its weight behind its demand of making Aaditya Thackeray as the Chief Minister of Maharashtra.

Situation was such that we submitted our resignations but now D K Shivakumar and others came and requested us to withdraw resignations, I will speak to K Sudhakar Rao and then see what is to be done,. After all I have spent decades in Congress

Meanwhile, on Friday, the Supreme Court took up the pleas of 10 dissident MLAs and directed the Speaker to maintain status quo on their resignation and disqualification till July 16.