﻿ In controversial remarks, PL Punia said, “In 2019 when Prime Minister had won the Lok Sabha election he had... 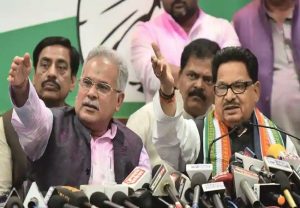 Congress leader sought to draw analogy between the two by saying that it is their habit to first bow down and then attack. The Trinamool Congress also lent its support to Congress as its leader Saugata Roy said people like Anant Hegde cause shame to the nation. "We are a supporter of Gandhi and they (BJP) are Nathuram Godse supporters. People of this country should see how BJP MPs are as they insult father of the nation," he added. Mahatma Gandhi, the man who led India to freedom from the British colonial rule, was assassinated on January 30, 1948, by Nathuram Godse, who was against Gandhi's idea of partition.

Soon after her statement, ruckus by opposition leaders in Lok Sabha was witnessed as they raised slogans of 'Mahatma Gandhi ki Jai and 'Down, down Godse'.

Thakur, BJP MP from Bhopal, had triggered an uproar during a discussion in the lower house on Wednesday when she interrupted DMK leader A Raja's speech during a discussion on the Special Protection Group (Amendment ) Bill and praised Mahatma Gandhi's assassin, Nathuram Godse.

The MP from Bhopal had triggered uproar during a discussion in the lower house on the Special Protection Group (Amendment) Bill by DMK member A Raja, interjected with a remark purportedly in praise of Mahatma Gandhi's assassin Nathuram Godse.

New Delhi: BJP MP Sadhvi Pragya Thakur is no stranger to controversy, mainly because of her objectionable remarks. The BJP...

Mahatma Gandhi killer Nathuram Godse was again worshipped in Gwalior of Madhya Pradesh. It was here that an attempt was made to raise a temple dedicated to Godse.

While the booksellers here believe that selling all varieties of books is a part of their business, some readers at the fair think that it is important to be aware of all perspectives.