Happy Bithday Ram Nath Kovind: Kovind was born on 1st October 1945 at village Paraunkh in Kanpur district of the State of Uttar Pradesh.

A gazette notification published on Monday said the President had given his nod to changing the name. Dr Kalam was a pioneer in developing the country's missile projects. In 1997, he received the Bharat Ratna, the highest civilian award in India. The International Yoga Day was proposed by Prime Minister Narendra Modi in his speech at the United Nations General Assembly (UNGA) on September 27, 2014. 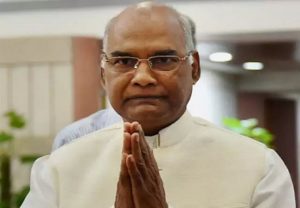 I am confident that the administration is doing everything possible to bring the situation under control at the earliest, said President Ram Nath Kovind. After the mercy petition was rejected, a Delhi court has issued a fresh death warrant against the four death-row convicts in the December 2012 gang-rape and murder case, for their execution at 6 am on February 1.

President Ram Nath Kovind is scheduled to inaugurate the fifth edition of the India International Science Festival (IISF) 2019 to be held in Kolkata from November 5, one of the organisers said on Friday.

We salute grit, valour of those who defended India: President on Kargil Vijay Diwas

Later in the day, the President will visit the war memorial in Jammu and Kashmir's Drass to pay tributes to soldiers who laid down their lives in the 1999 conflict.