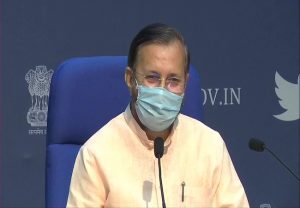 Worst of COVID-19 is over but people should follow precautions: Javadekar

The minister said the lockdown has brought us success in containing the COVID-19 pandemic. "Now that the restrictions in third phase, practically half of the country will be fully operational from May 4," said Javadekar. No decision yet on resumption of flight operations: Prakash Javadekar

The Union Civil Aviation Minister said that earlier also he had mentioned that lifting the restriction would be "considered" after the lockdown ends. Centre brings in Ordinance to end violence against health workers

Javadekar said that an amendment will be made to the Epidemic Diseases Act, 1897 and ordinance will be implemented.

"He (PM Modi) has a plan afoot, which will be announced tomorrow, about what can be allowed and what cannot be allowed after April 20. However, he has essentially appealed to continue the lockdown," Javadekar said.