Babar's superlative form had helped him replace India captain Virat Kohli at the top of the men's ODI player rankings last week and this week's T20I update sees him make a strong 47-point surge to overtake Australia's Aaron Finch in the T20I rankings after scoring 122 in the third match. 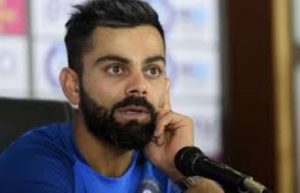 The recently posted video clearly shows how sensitive the duo is about dogs. Meanwhile, Anushka is looking to open her animal shelter next year in the outskirts of Mumbai, as per an official press release. Babar Azam dislodges Kohli as No. 1 batsman in ODIs

The 26-year-old's player of the match effort of an 82-ball 94 in the last match of the ICC Men's Cricket World Cup Super League series against South Africa in Centurion has helped him gain 13 rating points to reach 865 points and he now leads the Indian captain by eight points.

Harshal Patel delivered a stunning bowling performance as RCB restricted Mumbai Indians to 159 runs in the allotted twenty overs after opting to bowl first. Harshal scalped five wickets in the innings and gave away just 27 runs from his four overs. For Mumbai Indians, Chris Lynn top-scored after playing a knock of 49 runs RCB's star player AB de Villiers added that with some new faces in the squad it will a tough game for Mumbai Indians to get over the line.