Varanasi: Prime Minister Narendra Modi on Saturday came down heavily on the Opposition for politicizing the Ukraine crisis, saying that “dynasts always look for opportunities to serve their self-interests”.

“Blind opposition, continuous opposition, acute frustration, and negativity have become their political ideology,” PM Modi said in his sharp attack on the Opposition. PM Modi while campaigning for the last phase of the Uttar Pradesh Assembly elections said that the Opposition parties look for political interests even when the nation faces challenges, making the situation even more critical.

His statement came amidst India stepping up the evacuation of the stranded Indian nationals under ‘Operation Ganga’. Addressing an election rally in his Parliamentary constituency Varanasi, the Prime Minister said, “Whenever some challenges crop up before the nation, these dynasts look for their political interests. If India’s security forces and people deal with a crisis, the Opposition parties do everything to make the situation more critical. We saw this during the pandemic and today during the Ukraine crisis.”

The Opposition, mainly Congress, has been slamming the Centre over ‘Operation Ganga’, alleging late reaction in the evacuation of Indians.

Earlier in the day, ConUP polls: PM Modi slams Opposition for politicising Ukraine crisisgress leader Rahul Gandhi slammed the Centre, citing a media report claiming that students were asked to clean toilets to return to India. “It is an insult to the entire country,” remarked Gandhi on the media report. He had earlier said that “evacuation is a duty and not a favour”. 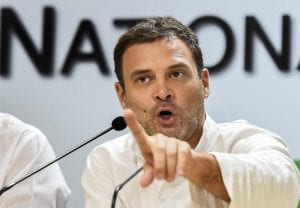 For the past two years, the Prime Minister said free ration is being made available to over 80 crores poor, Dalits, backward, and tribals. “The entire world is amazed at the rollout of the foodgrains scheme. But I am happy that the poor are happy,” he added.

“Those who live in palaces don’t know the troubles that a poor mother goes through in absence of a toilet at home. They have to either think of answering nature’s call before sunrise or bear the pain throughout the day and do so only after sunset,” the Prime Minister said. PM Modi has been camping in Varanasi for the last two days. His Parliamentary constituency will go to the polls in the last phase of the state Assembly elections. Campaigning for the seventh phase of the polls will end on Friday evening.

A total of 54 Assembly seats across nine districts including Azamgarh, Mau, Jaunpur, Ghazipur, Chandauli, Varanasi, Mirzapur, Bhadohi and Sonbhadra, will go to polls on March 7.