Actor Katrina Kaif on Thursday treated her fans to two stunning pictures as she was seen enjoying by the serene blue sea in the Maldives. Ayodhya, the birthplace of Lord Ram, gears up to celebrate the festival of lights. The holy town has been adorned and decorated with lights and pandals at many places. Take a look at these pictures as the town and its residents get ready to drown in festivities. 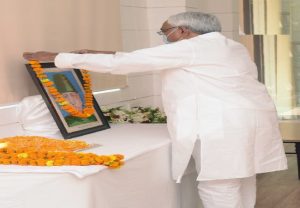 Elated over BJP's performance in Bihar Assembly elections and bypolls in various states, Uttar Pradesh Chief Minister Yogi Adityanath on Tuesday said the poll results have reiterated that "Modi hai to mumkin hai", and the party has given hints of its performance in the future elections. Yogi Adityanath was speaking to reporters at the UP BJP office. With the trends of counting of votes on Tuesday showing the BJP leading in all eight assembly constituencies in Gujarat, the party workers broke into celebration and burst firecrackers at its headquarter here. The BJP has 107 MLAs in the 230-member Assembly, and needs at least nine seats to stay in power. The Congress, on the other hand, needs to win all 28 seats if it wants to return to power.