Arvind Kejriwal urges migrant workers to stay back in Delhi, says all arrangements made

New Delhi: Delhi Chief Minister Arvind Kejriwal on the second consecutive day made an appeal to migrant workers leaving the national capital to stay back, stating that his government is working tirelessly to provide them all basic facilities for living in the lockdown imposed to curb COVID-19 spread. 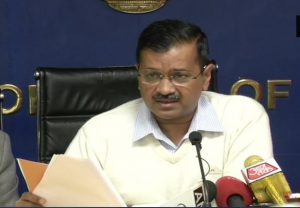 In a tweet, the Delhi Chief Minister said, “Some people are getting desperate to go back to their homes. Prime Minister ji has appealed everyone not to move out and remain wherever they are. I am also requesting you people to stayback and not go to your villages, because in so much of crowd, you may also fall prey to coronavirus. Then, this virus will also be spread in villages through you. It will later reach to several corners of the country. Then it would be difficult for us to combat this menace.”

“I am assuring you all that the Delhi government has made arrangements for your food and stay. For country’s interest, do not move to your villages.”

While addressing a press conference, Chief Minister Kejriwal on Saturday appealed to migrant workers leaving the national capital to stay back, even as he said that his government has arranged for buses to transport them.

Deputy Chief Minister Manish Sisodia also made a similar appeal, while stating that the Delhi government has deployed 100 buses for people attempting to walk home from the city. Many groups have also attempted to walk back to their villages.

According to the Ministry of Health and Family Welfare, the cases of COVID-19 are on a rise every day and as on March 29 at 10:30 am, there are 867 active cases in India along with 86 recoveries and 25 fatalities. (ANI)