Bookings for 15 passenger trains starting from Tuesday has started from 6 pm on Monday as the data pertaining to special trains is being fed on the IRCTC website. The Ministry of Home Affairs (MHA) on Wednesday granted permission for movement of the stranded people, including migrants labourers, workers, students and tourists. A Covid-19 patient narrates tale of his treatment at Govt hospital, from diet chart to 24×7 service

Giving an account of how Covid-19 patients are treated at hospital, a Gujarat resident saluted the spirit and service of Corona Warriors in the fight against deadly virus.

President Donald Trump and Prime Minister Narendra Modi cemented their friendship with joint rally in Motera, attended by more than... ﻿ US President Donald Trump surprised the lakhs of attendees at his ‘Namaste Trump’ event in Ahmedabad, when he mentioned... The US President arrived shortly before noon at Sardar Vallabhbhai Patel International Airport here with his wife Melania and a ministerial delegation that also includes his daughter Ivanka and son-in-law Jared Kushner who serve as senior advisors to Trump.

Amid tight security, US President Donald Trump and Prime Minister Narendra Modi participated in a road-show here on Monday. The road-show was held from Ahmedabad airport to Motera stadium, a distance of nearly 20 kilometres. However, Trump briefly stopped over at Sabarmati Ashram, along with his wife Melania and the Prime Minister Modi. Trump was dressed in a well-fitted black suit with matching black trousers, teamed with a crisp white shirt and yellow tie, while Modi opted for a white kurta and sleeveless bandhgala jacket. As the cavalcade of the two leaders passed by, thousands of people cheered and gave thunderous applause to them. PM Modi welcomes US President Trump to India with a hug

Trump is slated to take part in a road-show, besides addressing the 'Namaste Trump' event along with Modi in the Motera Stadium, the world's largest cricket ground with a seating capacity of 1.10 lakh people. 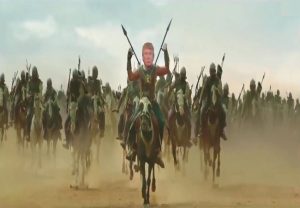 The US President will reach Gujarat's Ahmedabad by noon on Monday and is slated to address a mammoth crowd of more than 100,000 people which is expected to turn up for an event at the Motera Stadium in Ahmedabad on the lines of the 'Howdy Modi' function that was addressed by the US President and Prime Minister Narendra Modi in Houston in September last year.