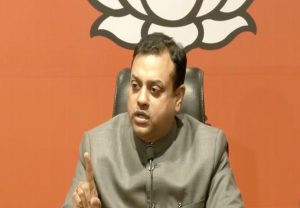 Congress, other opposition parties abusing Hindus in the name of protest against CAA: Sambit Patra

"Two days back former Maharashtra CM and Congress leader Ashok Chavan said that a coalition government was formed in Maharashtra with Shiv Sena as Muslims had said that BJP is their biggest enemy. This means that Congress party forms the government only by asking Muslims but not consulting Hindus," he said.

The party's Maharashtra unit chief Imtiaz Jaleel had last week said that the Assembly elections in Maharashtra and Haryana posed an opportunity for the public to "change the atmosphere in the country".

I might be shot dead by followers of Godse, says Owaisi

The AIMIM chief further said the special provisions related to Nagaland, Mizoram, Manipur, Assam, and Himachal Pradesh will also be scrapped by the government soon.

Akbaruddin asserted that the BJP leader who won the Nizamabad parliamentary seat may occupy the post of Mayor. He further appealed to the Muslim community to come together and stand strong, adding that if they fail to do so, BJP may win the municipality election.

Addressing a public gathering on Tuesday, Owaisi said, "There was a time when Deputy Mayor of Nizamabad was from AIMIM, now BJP has an MP in Nizamabad. If you don't want AIMIM to win, it is okay, but defeat the BJP."