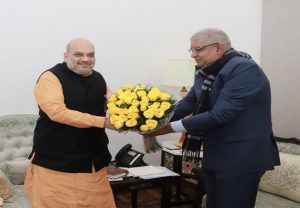 "Security environment (in West Bengal) is under threat. Al Queda has spread its network. Illegal bomb-making are rampant. I would like to know what are they (administration in the state) doing? The position of DGP in West Bengal is an open secret. That is why I say we have political Police," Dhankhar said

Osama bin Laden was eliminated in a special operation by US Navy Seals in 2011 at the garrison town of Abbottabad. After killing him, the Navy Seals flown out of Pakistan alongwith his body.

Times in its article revealed that there were no reports of any technical glitch and the Pakistani delegation, including Khan, were "disemboweled" from the Saudi's aircraft following Salman's resentment.

Article 370 of the Indian constitution gives a special status to Jammu and Kashmir, thereby allowing it to have a separate constitution, a state flag and autonomy over the internal administration of the state.

Hamza bin Laden is believed to have made his last public appearance in 2018. He was regarded as the potential successor to Al-Qaeda chief Ayman al-Zawahiri. The State Department had designated him as a "Specially Designated Global Terrorist" in January 2017.

During a separate event, the Pakistani Prime Minister also said that they had 40 different militant groups operating within its borders. He also claimed that previous governments were not in control and did not tell the US about the exact "truth on the ground."

The four freshmen representatives have been targeted by Trump in a scathing Twitter tirade which started on Sunday. He had asked the leaders to got back to the "broken, crime-infested countries" they came from -- a claim which is being seen as a direct attack on Omar who was born in Somalia

All the Pakistani Army and government are interested in is exploiting the mujahideen for specific political objectives, only to dump or persecute them later," Zawahiri claimed, highlighting Pakistan's role while casting them in a negative light