The 77-year-old actor then asked the people to fight against coronavirus in the same way in which they fought with open defecation and polio. The superstar is currently shooting for sci-fi film 'Brahmastra'. Directed by Ayan Mukherji, it is the first part of a trilogy. The 77-year-old star shared a picture of him hugging the ' Kalank' actor and wrote: "... she breezed in .. did her shot .. a huddle .. and out .. the effervescent, supremely talented, scintillating Alia .." Ranbir Kapoor is one of Amitabh Bachchan’s favourites!

Earlier in February, Bhatt shared a video where the director of the film, Ayan Mukherji announced the final release date of 'Brahmastra' amid a candid conversation with Ranbir Kapoor. 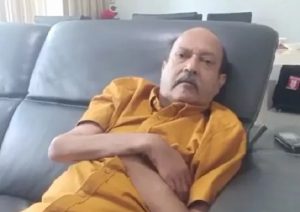 "Today is my father's death anniversary and I got a message for the same from @SrBachchan ji. At this stage of life when I am fighting a battle of life and death I regret for my over reaction against Amit ji and family. Amitabh and Jaya Bachchan recently shot an advert not only with Katrina Kaif, in which she features as a bride, but also with south stars such as Nagarjuna, Prabhu and Shiva Rajkumar. Sharing a photo with "three superstars", Big B wrote: "Historic moment for Jaya and me... three superstar sons of three iconic legends' of Indian film industry work together with us... what honour. Nagarjuna - son Akkineni Nageswara Rao, Telugu. Shiva Rajkumar - son Dr Rajkumar, Kannada. Prabhu - son Sivaji Ganesan, Tamil." In this short video we can see the team jhund, which seems to be some notorious group of slum dwellers. Though no faces are being introduced in the teaser, we can just see them walking towards Amitabh Bachchan, who is again not visible. Veteran actor Amitabh Bachchan on Sunday received the prestigious Dada Saheb Phalke award from President Ram Nath Kovind at the Rashtrapati Bhavan. The megastar was conferred with the highest honour of the film industry for his tireless outstanding contribution to the world of cinema. The prestigious award is named after the father of Indian cinema, Dhundiraj Govind Phalke. It was instituted in 1969.