Burqa-clad political analyst ‘caught’ at Shaheen Bagh, protesters claim she was filming them

The woman - identified as Gunja Kapoor - raised suspicion when she kept asking "too many questions", said eyewitnesses. Some protesters insisted on frisking her and found a camera. This led to a commotion and she was caught by several women. Later, police came to the protest site and took her away. Prime Minister Narendra Modi on Saturday arrived here on a two-day visit to West Bengal. Ahead of his visit, the members of the Students Federation of India (SFI) staged a protest against the Citizenship (Amendment) Act and the National Register of Citizens (NRC).The students took to the streets holding placards with — ‘Go Back Modi’ and ‘United Against Fascism.’ Protests have been happening across the country ever since the law received the Presidential assent last month.

The Prime Minister will also unveil the plaque of 150 years of commemorative installation at the site of original Port Jetties and will inaugurate the upgraded ship repair facility of Cochin Kolkata Ship Repair Unit at Netaji Subhas Dry Dock along with other inaugurations on Saturday. 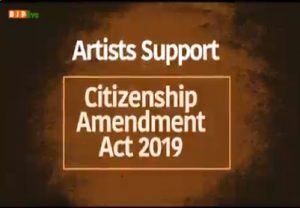 In the video, several B-Town celebs including Ranvir Shorey, Tanisha Mukherji, Shaan and director Anil Sharma have come out in support of the citizenship law. Protests erupted across the country over the CAA which grants Indian citizenship to Hindu, Christian, Sikh, Buddhist and Parsi refugees from Pakistan, Afghanistan, and Bangladesh and who entered India on or before December 31, 2014.

During the course of proceedings, senior advocate Kapil Sibal, appearing for one of the petitioners, had sought a stay order on the newly amended law. While opposing it, Attorney General K K Venugopal, cited four judgements which say that the Act should not be stayed.