For over 3 decades, Parsvnath Developers is shaping up India’s real estate growth story

Parsvnath Developers Limited is one name, that stands out from the rest of realty developers mainly because of its pan-India presence, rich experience of 34 years and trust-equation with its customers. 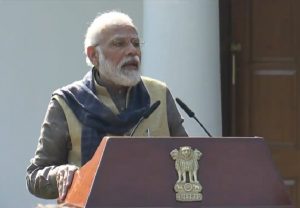 "Earlier, no one asked why it took so long and nobody gave an answer. Now we have set a target, facing the questions and making all-out efforts to achieve this target," PM Modi said. Industrial output shrinks by 4.3 per cent in September

Industrial output in September contracted by 4.3 per cent from a year earlier due to poor performance in the manufacturing sector, data released by the government on Monday showed.

Sonia cautions against signing RCEP, says it will be ‘body blow’ to economy

Sonia said that decision to sign Regional Comprehensive Economic Partnership Agreement (RCEP) will be a "body blow" to economy of the country and will bring "untold hardship" for farmers, SMEs.

Prime Minister Modi said that Tier-II and Tier-III cities in India have emerged as engines of growth and the global companies investing in India are assured of skilled manpower.