Facing flak for playing cricket during lockdown, BJP’s Manoj Tiwari says ‘did not violate any rule’

Tiwari was also seen singing and interacting with a group of people without wearing a mask during the event in Sonipat. The BJP leader, however, denied violating any lockdown guidelines. The AAP govt issued advertisement to recruit ‘Civil Defence Corps Volunteers’ in many newspapers including English & Hindi dailies. In the ad, Delhi govt seeks to hire nearly 200 volunteers but refers Sikkim as a separate nation much like Bhutan and Nepal. 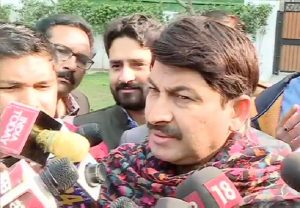 We opposed it and are still opposing it: Manoj Tiwari on Shaheen Bagh protest

New Delhi: Delhi BJP president Manoj Tiwari on Tuesday said that the party will continue to oppose the sit-in protest...

Initial trends not in our favor: BJP’s Manoj Tiwari

AAP, BJP, Congress, JDU are the main political parties in the fray. The primary fight is between the ruling AAP and the BJP which is seeking to make reentry into the state politics in the national capital after over 20 years. Confident that it will be a good day for BJP, says Manoj Tiwari ahead of counting

A tight security net has been put in place to ensure the counting of votes takes place in a peaceful manner. Over 670 candidates are in the fray for 70 seats at stake in the country's capital. As per our team’s survey, results will be in favour of BJP, says Manoj Tiwari

"Certain exit polls are showing that BJP will win 26 seats, but let me tell you that all these exit polls will fail on 11 Feb," Manoj Tiwari told media. Ready to debate if BJP declares its CM candidate by tomorrow, says Kejriwal

"We are giving time till 1 pm tomorrow for the BJP to declare a chief ministerial candidate. If they declare CM candidate by that time, I am ready to debate," Kejriwal said in a press conference here. New Delhi: With electioneering reaching a feverish pitch, the BJP star campaigners have stepped up their campaign in all 70... As BJP enters the last phase of the election campaign, Delhi BJP president Manoj Tiwari has decided to conclude the campaign in a musical way. On his birthday, Manoj Tiwari recorded a song to connect with the people of Delhi ahead of Assembly Elections. Delhi will go to polls in a single-phase on February 8 and the counting of votes will take place on February 11 The BJP leader recorded his song during the early hours on Saturday. The BJP, on Friday, released its manifesto for the Delhi elections which highlighted aspects like the Jal Jeevan, women healthcare, housing, justice to the victims of 1984 anti-Sikh riots and so on.