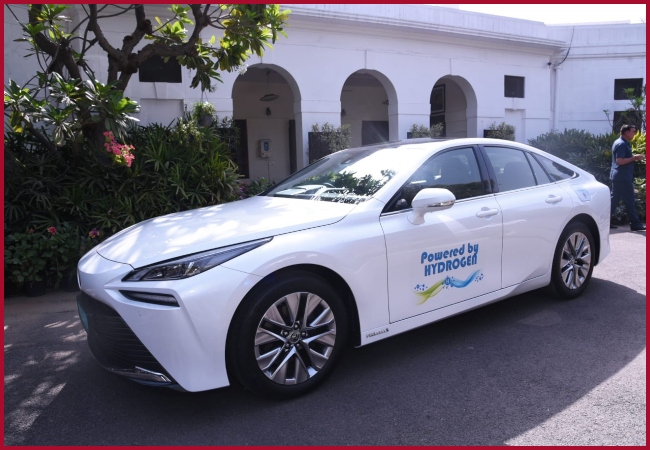 New Delhi: Nitin Gadkari, Minister of Road Transport and Highways, made headlines in the media after he arrived at Parliament in a car powered by green hydrogen fuel cells. The car he used is named ‘Mirai’. It is India’s first green hydrogen-powered car manufactured by Japan’s Toyota.

The video of Gadkari’s arrival is also going viral on the internet. He can be seen sitting in the front. This is a white-coloured car and has a green number plate. It is important to note that green plate is for environment-friendly cars similar to Electric vehicles. White number plates are used for commercial vehicles and yellow coloured plates.

As Nitin Gadkari created a buzz on the Internet, we decided to tell you more about the Hydrogen car and its pros and cons.

What is a Hydrogen car?

Hydrogen cars got their name from hydrogen as they use it to supply power to the wheels. It is reported to be a good choice for the needs of heat and power of the zero-carbon future.

‘Mirai’ can provide a range of up to 650 km on a single charge. This can be refilled in five minutes.

Hydrogen is not found in raw form opposed to Petrol, gas, or coal. It is obtained with the help of two chemical processes.

2. By converting water by electrolysis

The hydrogen car project was started by Japan’s Toyota Kirloskar Motor Pvt. along with International Center for Automotive Technology (ICAT). Under this project, the duo is studying and evaluating the performance of Toyota Mirai on Indian roads and climatic conditions.

Pros and Cons of Hydrogen cars 2. More costly than petrol and diesel