This comes after several incidents of attacks and stigmatisation of medical staff and doctors being reported from across the country following the outbreak of the COVID-19 crisis. At a regular media briefing on COVID-19 situation in India, Lav Agarwal, Joint Secretary, Union Health Ministry on Tuesday, said a total of 3,252 people have been cured of coronavirus in the country so far, including 705 patients who were discharged on Monday, taking the recovery percentage to 17.48 per cent. During the 'aarti' by the police few young men were seen standing with bowed heads. A woman police officer was seen performing 'aarti' of the lockdown violators. The song has been composed by Sajid-Wajid and lyrics have been penned by Salman and Hussain Dalal. These Indonesians were caught hiding in a mosque on return from the national capital in Dhanbad's mosque in Govindpur. A total of 12 people were hiding in the mosque. While 10 of them are from Indonesia, the remaining two belong to Maharashtra.

The number of COVID-19 cases has increased to 1407 in Madhya Pradesh including 72 deaths and 131 cured patients. 890 cases have been reported in Indore and 214 in Bhopal so far, according to the State Health Department. Chhattisgarh, Chandigarh and Pudducherry have reported 33, 21 and 7 cases respectively. While West Bengal has 231 coronavirus infected people, Odisha has confirmed 60 cases. 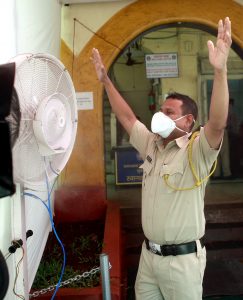 Police personnel sanitize themselves infront of mist spray fans to contain the spread of COVID-19 in Mumbai on Saturday.