The Government of Gujarat will start work for IIS at Nasmed, about 20 km from Ahmedabad, which is aimed at providing training in highly specialized areas. The state government has allotted around 20-acre land to the Tata Group for the same. Schools to reopen from February 1 in these states: Check full list here

Almost all the states have also implemented that it will be necessary to sign a written consent of allowing the children to visit the schools; here's all you need to know. Gujarat schools to reopen from Feb 1 for classes 9, 11

Earlier, The Gujarat government on January 6 announced the reopening of schools for students of classes 10th and 12th from January 11. Gujarat CM announced setting up of new industrial Estates in 987 hectares in 8 districts of the state. Out of all the 8 Estates the Morbi estate will be formed in an area of 500 hectors equipped with all the advanced infrastructural as well as ancillary facilities. 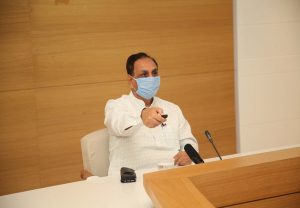 Gujarat CM Vijay Rupani said that Rajkot faced problems of water crisis in past, people hardly use to get pure drinking water. Today the waters of Narmada rivers have reached every house of Rajkot and the problem of water has been solved. Offering prayers at the first among the 12 Jyotirlinga shrines of Lord Shiva, Mr Rupani said that, “I have offered prayer and worshiped for the welfare of the people of the state especially from Covid-19. Nation and Gujarat will be back on track after the fight from Corona.” In the presence of the Honourable Ambassador of Switzerland to India and Bhutan, Dr. Ralf Heckner, the Government of Gujarat has entered into a Memorandum of Understanding with the Implementing Agency on the 20th of January, 2021, with intent to formalise the cooperation of the project with the Urban Development and Climate Change Departments. According to the CM, the fruit has long since been grown as a form of cactus in the country. "Nobody has to be alarmed by the word Kamalam," Rupani added.