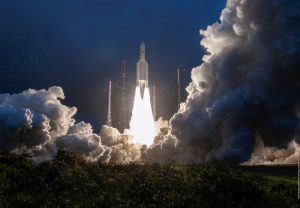 Calling it an "excellent start" to 2020 for Isro with the launch, he said, "The mission team at the master control facility have already acquired the satellite and they will immediately complete the post launch operations...."

ISRO to Launch Chandrayaan-3 in 2020: Minister

Chandrayaan-2 mission was India's first attempt to land on lunar surface. The ISRO had planned the landing on the South Pole of the lunar surface. However, the lander Vikram hard-landed.

The Indian Space Research Organisation (ISRO) is admired for sending satellites and rockets into the space but a senior scientist...

PSLV-C48 will also carry nine customer satellites including one from Israel, one from Italy, one from Japan and six from the USA as "co-passengers".

Our own orbiter had already located Vikram lander: ISRO Chief

ISRO chief's comments came after NASA said that it had found the remains of the Vikram lander has been found by its Lunar Reconnaissance Orbiter and credited the discovery to Chennai based amateur astronomer and engineer Shanmuga Subramanium.

Spent 7-8 hours each day for 4-5 days on this: Shanmuga Subramanian on discovering debris of Vikram Lander

The NASA posted images clicked by its Lunar Reconnaissance Orbiter (LRO) Camera, showing the site's changes on the Moon and the impact point before and after the spacecraft had made a hard-landing on the lunar surface.

Views of PSLV C47 lift off from Sriharikota

With an overall mass of 1,625kgs, CARTOSAT-3 would address the increased user's demands for large scale urban planning, rural resource and infrastructure development, coastal land use and land cover.