The certificate of election was awarded to JPS Rathore, the authorized representative of Islam, by Special Secretary Assembly As the video spread on social media, it created a furore and triggered outrage owing to highly abusive words against Hindu Gods. CM Yogi’s stern warning to rioters: UP will not accept anarchy, recoveries will be made for damaging public property

After the anti-Citizenship Amendment Act (CAA) protests erupted in the state in December last year, Chief Minister Yogi had said that the cost of damages to public properties will be recovered from the protesters. Sanjay Singh has come under fire for making controversial remarks at Yogi Adityanath-led Uttar Pradesh government as three FIRs have been filed against him in the matter. UP STF guns down wanted criminal Rakesh Pandey in Lucknow

The investigation of the case was transferred from UP Police to the Central Bureau of Investigation (CBI). In 2013, the Supreme Court transferred the case from Ghazipur to Delhi after Rai's wife Alka Rai filed a plea in the court. Apart from scores of diyas, Rangoli made with flowers added colour to the Chief Minister Yogi Adityanath’s residence. 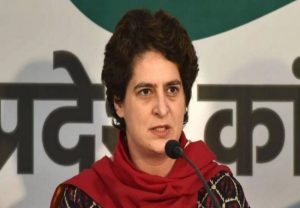 Cases of kidnapping are increasing in UP at an alarming rate: Priyanka Gandhi Vadra

The Congress General Secretary further slammed the Uttar Pradesh Government in a tweet stating that "jungleraj" is on the rise in the state. "State UP govt tested 91,830 samples for COVID-19 yesterday and in the process becomes the second state, after Tamil Nadu, to cross the 20 lakhs COVID-19 testing mark," tweeted Kumar. Deep Prakash has been on the run since the Kanpur encounter on July 3, according to Prashant Kumar, Uttar Pradesh Additional Director General (ADG), Law and Order.