The Kamal Nath government has opposed the CAA passed by Parliament recently. CAA provides for granting citizenship for Hindus, Sikhs, Buddhists, Jains, Parsis and Christians, who had migrated to India before December 31, 2014. The district collector, who had also visited the spot in a bid to control the situation, said that the entire incident was videographed and action will be taken against the perpetrators after identification. New Delhi: The principal of a government school in Ratlam district of Madhya Pradesh was suspended on Wednesday by the... 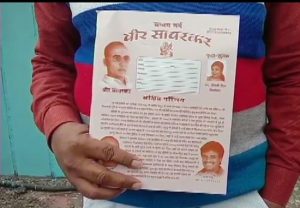 KC Sharma, District Education Officer said, "The principal was suspended as he didn't take permission from concerned authorities before approving the distribution of notebooks with Savarkar's photo." In a series of tweets, the Madhya Pradesh Chief Minister announced that the movie which is set to release tomorrow has been made tax-free.

The tableaux proposals received from various States/UTs and Central Ministries/Departments are evaluated in a series of meetings of the Expert Committee comprising of eminent persons in the field of art, culture, painting, sculpture, music, architecture, choreography etc.

Sharad Sanghi, the owner of Sanghi Motors, said the Maharaj of Barwani owns around 100 vintage cars which they send to rallies not only in India but also abroad.

Five people died on the spot while four others were declared brought dead at the hospital, Kahn said. The injured are undergoing treatment at the hospital.

Farmer Jitendra Kumar has registered a complaint with the police in this regard and said that onions were sown on 1.6 acre of land and as he was planning to harvest the crop, it was stolen by thieves.