Taj Mahal Reopens: After being shut for tourists for around six months, one of the seven wonders of the world, Taj Mahal reopened from Monday. It was closed on March 17 after all heritage monuments protected under the Archeological Survey of India, after discussion with the union ministry of culture, were asked to close for the visitors following the rapid outbreak of SARS-CoV-2. Agra city, situated on the banks of the Yamuna river in Uttar Pradesh was hit by a severe thunderstorm on... On Monday, the US President had addressed the 'Namaste Trump' event at Ahmedabad's Motera Stadium along with Modi, where both the leaders had hailed the growing ties between the two countries. Trump arrives in Delhi for last leg of his India visit

The talks would be followed by the exchange of agreements and Memoranda of Understanding (MoU) between the two countries. 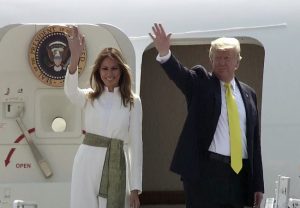 US President Trump leaves for New Delhi from Agra

Trump was supposed to leave at around 5 pm, however, he stayed beyond the scheduled time. In Delhi, Trump will meet President Ram Nath Kovind, Vice President M Venkaiah Naidu and External Affairs Minister S Jaishankar. The structure with white marble domes and minarets became a Unesco World Heritage site in 1983. Regarded as the monument to love, the Taj Mahal attracts millions of visitors every year.

Agra decked with billboards to welcome US President Donald Trump

The road from the airport to the Taj Mahal has several billboards on display, with photographs of the US President and the first lady Melania Trump along with Prime Minister Narendra Modi. "Narendra Modi coined a good slogan of Make in India but not a single factory has been set up. He is selling everything - Indian Oil, Air India, Hindustan Petroleum, Railways and even Red Fort. He may sell even the Taj Mahal," said Gandhi addressing a rally in Jangpura.

Play shows how nexus between elected representatives, contractors, public interest agitants and litigants, commission agents, government officials have seeped into the system to create a quid pro quo and sharing of spoils system.