Mumbai Indians defeated KKR by 10 runs thanks to a spirited bowling performance from the Rohit Sharma-led side. Russell's five-wicket haul saw Mumbai Indians bundled out for 152 after batsman Suryakumar Yadav's (56) quickfire knock. In response, KKR was restricted to 142/7. Juventus are currently at the third spot of the Serie A standings with 59 points. Cristiano Ronaldo and team have played 29 games so far in the tournament, winning seventeen and losing four (eight draws).

Harshal Patel delivered a stunning bowling performance as RCB restricted Mumbai Indians to 159 runs in the allotted twenty overs after opting to bowl first. Harshal scalped five wickets in the innings and gave away just 27 runs from his four overs. For Mumbai Indians, Chris Lynn top-scored after playing a knock of 49 runs The event started at 7 pm today and was held in virtual mode due to restrictions posed by the Covid-19 pandemic. The decider of the three-match ODI series will be played at SuperSport Park, Centurion. Pakistan will be going up against a depleted South African side who will be missing the services of Quinton de Kock, David Miller, Kagiso Rabada, Lungi Ngidi and Anrich Nortje 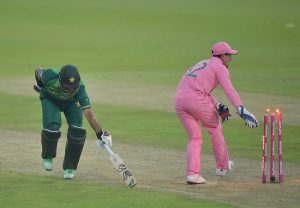 Zaman's valiant 193-run knock was ended in the first ball of the final over in the game as a direct hit from Aiden Markram from long-off caught him short of his crease. There is a huge debate about the dismissal as wicketkeeper Quinton de Kock appeared to gesture that the throw from Markram might be going to the non-striker's end.