The US is the worst affected country in the world from the coronavirus. On Friday, the country reported over 69,000 cases, a third straight daily rise.

Washington [US]: In a first since the coronavirus pandemic began, US President Donald Trump, who had for months declined to wear a face mask in public, was spotted donning one on Saturday.

Trump wore a dark coloured face mask during his visit to Walter Reed to see wounded military members, The Hill reported. This comes as US is ravaged with coronavirus pandemic which has claimed over 1,34,000 lives. “I think when you are in a hospital, especially in that particular setting when you are talking to a lot of soldiers, people that in some cases just got off the operating table, I think it is a great thing to wear a mask,” Trump told reporters at the White House just before his visit to Walter Reed.

“I’ve never been against masks, but I do believe they have a time and a place” he said before boarding his plane to take him to the hospital. 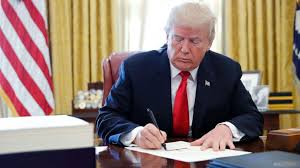 According to a report in the CNN, Trump’s decision came after “quiet lobbying” campaign by some White House aides and political advisors. Some of his advisors were some of whom were spooked by the sight of so many maskless Trump supporters at a rally in Tulsa, Oklahoma, last month and concerned by the surge of coronavirus cases in the South.

One presidential adviser described the effort as more than a week of “lots of negotiation” and repeated “pleading” by aides who urged the President to set an example for his supporters by wearing a mask on the visit. The US is the worst affected country in the world from the coronavirus. On Friday, the country reported over 69,000 cases, a third straight daily rise.

As of Saturday, 3.18 million infections were recorded with more than 134,000 deaths, according to Johns Hopkins University data. (ANI)