New Delhi: As Covid-19 headcounts soar each day, handshakes now seem to be running out of favour among people as a means to greet each other.

According to Fox News, newly surfaced viral videos on Twitter suggest that people are now ditching handshakes and are instead bumping their feet with each other.

A short comical clip from China that was Tweeted by the user “@V_actually” showed a masked man dressed in black stepping out of a minivan, who was then approached by another person for a handshake.

People in China found another way to greet since they can't shake hands.

I love how people can adapt and keep a sense of humor about stressful situations. pic.twitter.com/P8MSfOdJ2H

The guy in black, however, turned down the friendly gesture but then proceeded to bump his ankle with the person and two others. The clip was tweeted with the caption: “People in China found another way to greet since they can’t shake hands. The Wuhan Shake.” 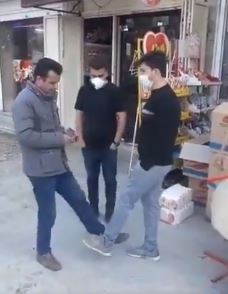 Another Twitter video from Iran, that was shared by Arshin Adib-Moghaddam, showed three people greeting each other in the same manner. (ANI)

Study reveals why elderly employees might feel excluded at workplace