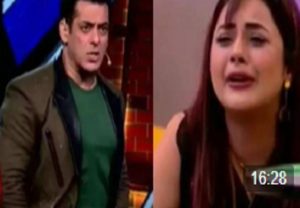 Bigg Boss 13: When Salman gave an earful to Shehnaz Gill ﻿ Makers of Bigg Boss 13 adopt every trick and tactics to keep the show interesting and captivating. Latest one... In a video, where Himanshi is seen mocking BB 13 host Salman Khan for entering into the house and doing household chores during Shehnaaz Gill's captaincy in an attempt to teach the housemates a lesson of cleanliness.

Big-ticket reality shows like 'Dance India Dance 7' failed to impress viewers on the other side shows like 'Bigg Boss 13' continued to grab eyeballs.

Shefali is disappointed with Siddharth Dey for not giving her the entire amount he has. Aarti and Shehnaz take advantage of the situation by trying to break the bond between Dey and Bagga

The task ended in a tie and Queen Devoleena Bhattcharjeena was the tiebreaker. She chose Rashami as the winner of the power card. With Power card's benefit, Salman declared Shukla as Rashami’s servant in the house. But the actress refused to take any of his services and freed him of the responsibility.

This year to add an extra twist in the game, Bigg Boss had assigned duties right from the first day and the housemates had to comply.

Bringing in a major twist in the nomination procedure, the girls now get an opportunity to nominate the boys. Getting as shrewd and direct as one can imagine, the girls hand over a black ring to the boy they no longer want to see inside the house.

This turned everybody against Shefali, on hearing about the task cancellation, she tries to agree to Devoleena's name for the title but it goes vain. The game seems to be intensifying in the very first week with seven contestants nominated for eviction, the housemates are adopting all possible strategies to stay in the house.