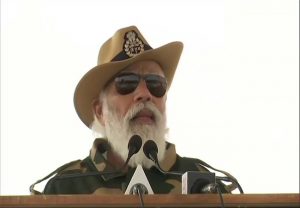 PM Modi celebrates Diwali with jawans at Longewala border, says ‘every Indian is proud of our soldiers’

Prime Minister appealed to people to light a 'diya' on Diwali as a salute to the soldiers guarding the nation on the borders. Defence spokesperson informed that the militants trying to infiltrate were intercepted by a patrol party of the Army and contact with them was established. In an exchange of firing, one militant was killed, said the spokesperson. An AK rifle and two bags were recovered from the site. Earlier today, Border Security Force (BSF) said that they foiled an attempt to smuggle arms, ammunition, and narcotics into India in Arnia area along the International Border from Pakistan side, on the intervening night of September 19 and 20. New Delhi: The Border Security Force (BSF) has shot dead 5 intruders who were trying to enter India from Pakistan... The home ministry has asked all paramilitaries to withdraw their companies from the Union Territory and send them back to their respective places.

The incident happened on the intervening night of August 7 and August 8, the official said. The force is on high alert in view of Independence day. Nine Central Reserve Police Force (CRPF) personnel died between April-June, due to coronavirus while 9 troops succumbed to the infection in July. A total of 4,165 coronavirus cases including 2,173 active cases and 1,974 recovered reported among CRPF troops. According to the BSF, Kumar, who was deployed in Samba sector of India- Pakistan International Border, was apprehended by BSF on the information of Punjab Police on July 11