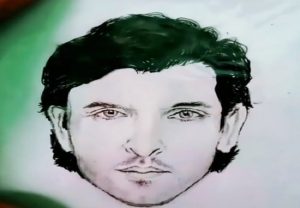 Hrithik Roshan shares an artsy fan tribute dedicated to him

The 'Bang Bang' actor is currently staying indoors and spending time with his children at his house owing to the lockdown. The 46-year-old actor took to Instagram and said, "Hi guys, this is the 7th day of lockdown. I just hope that all of you guys are using the time to learn something new every single day." Hrithik Roshan is one of the most talented actresses in Bollywood. The star enjoys a massive fan following on social media. Whenever he shares his photos or videos on Instagram, her fans go gaga over them. Recently, the star took to his Instagram stories to share a share some dashing photos of himself and we can't get enough of it. In these photos, we can see the star posing for some stunning photos at a balcony in LA. He looks dapper in cargo pants on a yellow turtle neck and maroon jacket. He finished the look with a pair of stylish sunnies and a cap. The post was captioned as, ''Old poses, different places Hrithik Roshan meets up with fans on his birthday | See Pics

Bollywood’s greek god Hrithik Roshan celebrates his 46th birthday today. The actor had a dream debut 20 years ago with Kaho Na... Pyaar Hai and has built on the great start establishing himself as one of the biggest stars in the industry currently. On the occasion of the actor’s birthday today, fans turned up in large numbers at his residence in Mumbai. Hrithik stepped out in the balcony of his apartment and thanked his fans for all the love. The star had a radiant smile on his face and the gratitude for his fans was evident. Fans turned up with posters of their favourite Hrithik Roshan films.

The story of thriller drama 'Batla House' is inspired by the real Batla House encounter that took place almost a decade ago on September 19, 2008, which is officially known as Operation Batla House.

this is the fifth Yash Raj Films to cross Rs 100 crore plus net box-office collection over the third day after 'Dhoom 3', 'Sultan', 'Tiger Zinda Hai' and 'Thugs of Hindostan'.