In the movie, the central character portrayed by the 'Queen' actor is seen making an inspiring comeback to 'Kabaddi' with support from her family and friends. 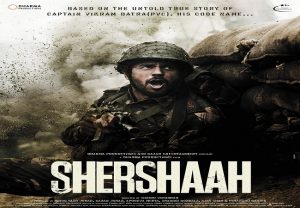 In the captivating posters, the Siddharth Malhotra is seen donning as the Indian Army officer in combat. The posters capture him in a war scenario.

The 2001 movie, produced under the Yash Raj banner, was helmed and written by Karan Johar. It boasts of an ensemble star cast, including BigB, Jaya Bachchan, Shah Rukh Khan, Kajol, Hrithik Roshan, and Kareena Kapoor, with Rani Mukerji appearing in a cameo.

Megastars Amitabh Bachchan and Rajinikanth along with Union Minister Prakash Javadekar and Goa Chief Minister Pramod Sawant lit up the ceremonial lamp to mark the inauguration of 50th International Film Festival of India here on Wednesday. Both the star looked regal, clad in almost identical bandh-gala jackets with full sleeves. Lyricist and Central Board of Film Certification chief Prasoon Joshi was also present among the dignitaries.

South Indian superstar Rajinikanth was on Wednesday conferred with the ‘Icon of Golden Jubilee Award’ for his outstanding contribution in Indian cinema at 50th International Film Festival of India here on Wednesday.

Rajnikant thanked and dedicated the award to his fans and the people with whom he worked during his almost 44-year long career.

Shah Rukh Khan waved at fans who have gathered outside his residence, 'Mannat' on his 54th birthday.