The senior leaders, including co-chair Pushpa Kamal Dahal, Madhav Nepal, Jhalnath Khanal and Bamdev Gautam, asked the Prime Minister to step down from the post citing his 'failure' over various issues. Geelani is understood to have realised his folly of supporting Pakistan and that they only pump in weapons and drugs. "Two of Gujarat MLAs voluntarily gave their resignation yesterday evening. I have investigated the matter, they have resigned with their own will," said Trivedi while speaking to the reporters. 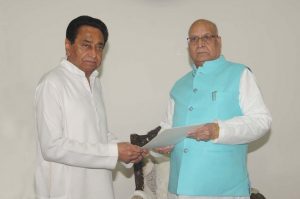 Kamal Nath on Friday tendered his resignation to Governor Lalji Tandon and stated that the recent turn of events in the state adds new chapter in the weakening of democratic principles.

The exit poll had suggested the Conservatives would win 368 seats in the 650-seat parliament, with the main opposition Labour party trailing on 191, as per a report by the Washington Post.

On October 18, PPP chairman Bilawal Bhutto-Zardari had also called for the anti-government demonstrations and expressed support to JUI-F's 'Azadi March'.

Kevin's resignation comes at a time when Trump administration is facing a hard time to deal with the immigration issue. Several reports have appeared in the media signalling that administration officials and Trump are not on the same page when it comes to handling the contentious issue.

Situation was such that we submitted our resignations but now D K Shivakumar and others came and requested us to withdraw resignations, I will speak to K Sudhakar Rao and then see what is to be done,. After all I have spent decades in Congress

Had submitted resignation to Rahul Gandhi 8-10 days ago: Jyotiraditya Scindia

I am not a leader who gives orders to others. I think when there is a responsibility, there comes accountability, as well. Even I am responsible if the performance is not good. Therefore, I took the decision to resign