The letter was released on the behalf of Economic and Cybercrime Department from Bihar Police Headquarters on January 21. It is regarding the 'objectionable comments' made on social media against ministers and government officials. ‘My aim was to dent JDU, not to affect BJP’: Chirag Paswan says he will prepare for 2025 Bihar election

Chirag said that the voters in Bihar have expressed their faith in PM Modi and it is necessary that BJP gets stronger in Bihar in order to usher in development in the state. 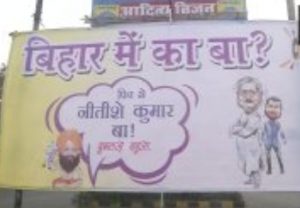 The closely contested battle saw the Mahagathbandhan narrowing the gap between the two alliances during the day with political parties in fray keeping an eye on the narrow margins. According to trends from the Election Commission at 8.30 pm, the ruling NDA is leading on 126 seats and Mahagathbandhan on 110 seats in the 243 member assembly. The trends show that there BJP is one seat ahead of RJD in the race to emerge as the single largest party. According to trends from the Election Commission at 6 pm, Mahagathbandhan is leading on 113 seats.The trends show that BJP and RJD are in a close tussle to emerge as the single largest party in the assembly.